MPC-BE has been created by Russian developers and compared to MPC–HC it has some additional features and various bug fixes.

The player is available in 22 languages.

Furthermore, MPC-BE offers improved support for Windows Vista, 7, 8 and 10, due to the 64-bit build; it can play and record television when a TV tuner is installed, it supports most subtitle types and it provides support for EVR/EVR CP.

Alterations compared to MPC–HC include added, changed and fixed features. For instance, added features are the support for opening CUE format files, support for displaying subtitles from stereoscopic pictures, VSFilters.

Changes include handling of AC3 packets, the possibility to move subtitles during playbacks and the folder of the last opened file being selected for saving playlist.

Many features have been fixed as well, and bugs like crashing when the user tries to search for a video decoded by the external decoder have been eliminated.

The system requirements of MPC–BE are a SSE capable CPU and the latest DirectX 9.0c runtime.

Overall, the interface and the user experience have been greatly improved compared to its predecessor.

Media Player Classic Black Edition is far from the Windows Media Player program which is the base for MPC, but easiness of use has remained the same, showing that modern-day players are accessible to all users. 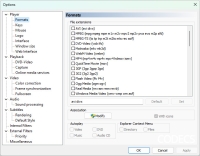 PowerDVD PowerDVD is a professional media player which allows you to render the most complex formats such as Blu-ray, 3D and HD on a variety of devices.

ALShow ALShow allows you to play DVDs and movies without needing additional software.

Zoom Player Zoom Player is able to play almost any format you throw at it and its interface is extremely intuitive and easy to use.

You used to put a blue color to the buttons for this player, it was looking so gorgeous, please use ...