The out_lame Winamp plugin makes it possible to create MP3 files directly from Winamp.
There is no simpler way of converting your music to the very popular MP3 format than by using this add-on.

Already outdated for a while, since it has not been upgraded since 2005, the out_lame Winamp plugin was tested with all Winamp versions from 2.05 to 5.x, except for the 3.x ones.

The plugin uses the LAME DLL to encode the MP3 files.

The last version of the out_lame Winamp plugin was 1.6.4 and it allowed you to perform a wide array of actions.

The plugin supported more than 16 bits input and offered various possibilities: encoding in different folders with the name of the artist, cleaning filenames in the output directory, removing or trimming blank samples at beginning and end, playing while encoding and switching back to another output plugin.

The plugin offers tooltips on configuration options and it creates both a continuous mode (all tracks in one) or separate files each time the album or title track information changes.

The developers of this plugin suggest downloading the latest version of the LAME MP3 encoder in order solve quality problems. You need to extract the lame_enc.dll file in Winamp -> Plugins folder.

The out_lame Winamp plugin is definitely a time saver and it gives new powers to Winamp, allowing you to obtain MP3 files using the well-known audio player’s interface.
X
Report it!
Share
Share 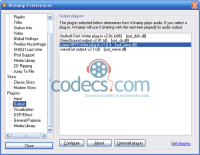 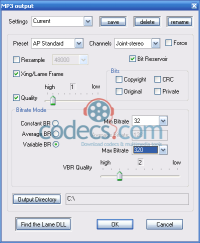 MatrixMixer MatrixMixer is an audio plug-in which integrates perfectly within Winamp and enables users to perform various actions such as converting audio files to DTS14 or DTS16, etc.

Download 259KB
Freeware 54.746 downloads
Be the first to review it!

Write a review or just post a comment about out_lame .
Let other people know about your opinion or experience with this software.
Write a review