The interface is enriched by better controls: you can add global hotkeys, which means you can control Windows Media Player from any other application.

Searching capabilities are improved with a real “find as you type” feature of the media library.

Regarding playback, Windows Media Player Plus! has a few interesting things to offer: party shuffle, restoring the last active playlist (including the exact item and the playback position), displaying currently played media in Windows Media Player’s title bar, options such as “stop after current” and “close after current”, offering the same features of the “What I’m listening to” plugin and the “Play Next” option when right-clicking a media item in the library. 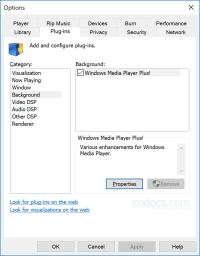 WMP Tag Plus WMP Tag Plus is a Windows Media Player plugin offering library and tagging support for other file formats than the default ones.

CoreFLAC Decoder and Encoder CoreFlac is a DirectShow-based tool for the FLAC audio codec which enables you to play files containing FLAC audio in a variety of media players.

It's good, except for the problem that it does not restore media after you close and open the player. Even ...