The Ut Video Codec Suite provides lossless compression and it supports YUV420 and RGB sources.
This VfW codec is fast, and its performance is better even than Huffyuv, the multithreading version.

Ut Video Codec can be used to encode with x264 and its developers intend to update it until its performance will be comparable with that of Lagarith Codec.

In terms of compression ratio, it works better than Huffyuv for progressive sources and worse than HuffYUV with interlace sources having a height greater than 288 pixels.

This codec allows you to use AviSynth scripts as input and to edit video files with ConvertToYV12 and to make x264 input the video by “AviSource” of a new AviSynth script.

Moreover, you can save the file at VirtualdubMod with Ut Video Codec YUV420 (ULY0) on the setting of your numbers of CPU cores and “predict left” for decode preference. Use “predict median” for compression-ratio preference.

Ut Video Codec Suite is still being tested and it may have several bugs.

For instance, ULY0 (YUV420) does not support interlaced videos, which means that when concerting RGB to YUV420, the video is mistakenly considered progressive. Also, EDIUS crashes when videos are placed on the timelines or when the video on the timeline starts playing.

Ut Video Codec Suite is a promising codec which is continually being improved. This application is very likely to provide better performance and to produce results comparable with the most popular codecs.
X
Report it!
Share
Share 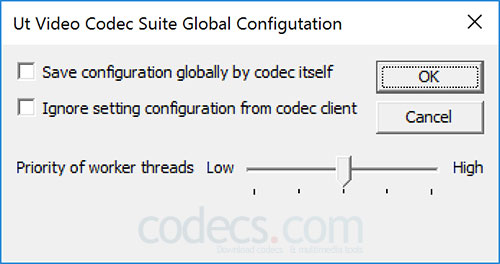 VobSub VobSub works as a subtitle filter for VirtualDub and for all media players based on DirectShow.

UScreenCapture Filter UScreenCapture DirectShow Filter is enabling you to stream your Windows desktop to any DirectShow compatible software and get the most out of screen capturing capabilities.

Download 2.4MB
Freeware 78.778 downloads
Be the first to review it!

Write a review or just post a comment about Ut Video Codec Suite .
Let other people know about your opinion or experience with this software.
Write a review