SyncView is a great help for anyone performing MPEG video production.
This AVI/WAV alignment tool is completely free. SyncView can be used to determine the exact audio offsets you need in order to synchronize audio and video files properly when creating MPEG videos.

There is also an optional SyncTest Media component, which consists of a DivX AVI with visual frame markers and a perfectly calibrated WAV file.

You can use SyncTest Media to rule out synchronization problems from your MPEG projects. You will see that the problem is caused either by the encoder/multiplexer or the VCD player.

Besides tracing the most common synchronization problems, you will also be able to design precise audio and video synchronization settings while muxing or encoding material for VCD.

SyncView is considered obsolete, as it has not been developed anymore since 2006. Its last version, 2.1.0, was added several new features.

The new WAV Export Tool operations allow you to resize audio to a given length and then resample it to a second length in one operation. Due to the two-pass procedure, this process has become faster and more reliable.

The “Direct fix” option which is part of the Stream Demux Tool is useful to anyone looking to change the framerate of the source AVI fast. Thus you don’t have to demux the file first or to copy the AVI file.

Use this powerful alignment tool and your MPEG projects will come out as expected!
X
Report it!
Share
Share 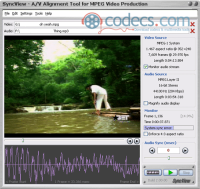 3D-Subtitler With 3D-Subtitler you can convert common SRT subtitles to IDX and SUP subtitles which are compatible with 3D movies.

AviSubDetector With AviSubDetector you can detect and extract hard-burned subtitles from multiple video sources such as AVI and AviSynth files.

SubViewer SubViewer is an awarded tool for synchronizing subtitles with your movies.

FurySync FurySync is a free application allowing you to synchronize subtitles.