Ogg-Vorbis Encoder for Winamp provides you with a fast and easy method of ripping your Audio CDs into the free Ogg Vorbis format and using Winamp 5.
This application’s final release was in 2005, version 1.1 for Winamp 5.

At that time, Ogg Vorbis was still a new format.

Ogg Vorbis is still considered as one of the best lossy codecs.

Various improvements have been made to the last update: changed the “estimate bitrate” user interface string to “nominal bitrate” for extra accuracy, merged the two different installers (v1.1 and Archer) into a single one (the user can choose one of the two modes when installation begins), and added a SSE processor detection in the installer, preventing users from installing versions which are not compatible with their computers.
X
Report it!
Share
Share 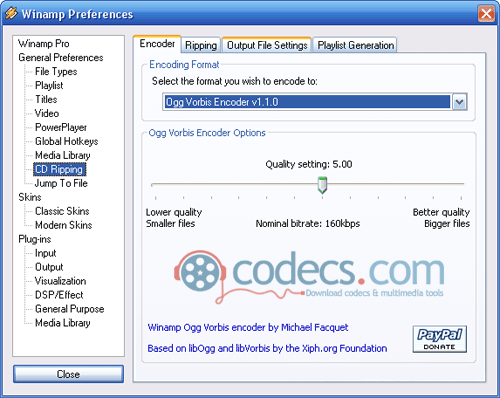 Free CD Ripper Completely free, compact and user-friendly, this application rips CD audio tracks and converts them to MP3 or OGG in no time.

Download 298KB
Freeware 13.773 downloads
Be the first to review it!

Write a review or just post a comment about Ogg-Vorbis Encoder for Winamp .
Let other people know about your opinion or experience with this software.
Write a review