LZOcodec enables you to perform lossless video compression in three steps: converting RGB information to YUY2, creating a compression algorithm of its own and eventually using the LZO algorithm to compress the information.
LZOcodec is recommended to users which want to capture their screens to AVI video files, to convert Flash files with the SWF extension to an AVI and to convert PowerPoint files to an AVI.

This codec can also be used with actual videos, but rendering medium performance.

LZOcodec is similar to CamStudio Lossless Codec, a tool which compresses every frame without taking care of the previous one.

Compared to the other codec, this one is superior because it uses previous frames in order to compress more and to produce better results.

The last version of LZOcodec, 0.4, was released in 2006 and it was improved with an algorithm that allowed you to compress a bit more and a bit faster as well.

LZOcodec 0.3 featured two extra colorspaces, YV16 and YV12 (not recommended). Colorspaces can be used for both input and output video and they have been obtained using VirtualDub.

LZOcodec can be used as a capture codec if your computer is fast, but it is rather recommended for other types of tasks, such as obtaining AVI files from screen captures or Power Point presentations.

LZOcodec also comes in handy when you want to convert Flash files to AVI. In order to enjoy all these, just install this free and small-sized codec to your computer and get the most out of your screen captures.
X
Report it!
Share
Share 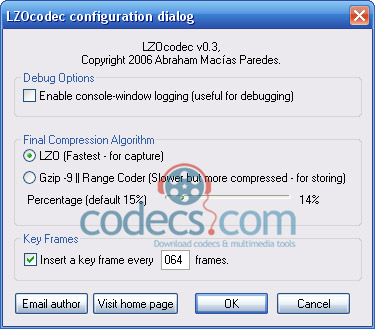 ReClock Filter ReClock DirectShow Filter helps you to avoid discontinuous playback of AVI and MPEG files, including those situations when you connect your PC to a TV set.

Download 44KB
Freeware 9.676 downloads
Be the first to review it!

Write a review or just post a comment about LZOcodec .
Let other people know about your opinion or experience with this software.
Write a review