AIMP is one of the best free media players available on the market, allowing you to play music, radio stations, and movies.
This player provided by Russian developers is being updated constantly and becomes better with every new version. But let’s see what AIMP has to offer to its users!

First of all, AIMP is able to play the most common media formats, such as MP3, FLAC, MAC, AAC, M3U, OPUS, OGG, TTA, RMI, WMA, WAV and many others.

Regarding formats, AIMP also packs a media converter, allowing you to switch between the most common file extensions.

Grabbing music from an Audio CD is also possible, and you can set the computer to shut down after conversion operation. You can add more formats to the list by installing plugins.

Other major features of AIMP for Windows include CUE sheets support, 32-bit audio processing, and Internet radio. The sound engine includes a 18-band equalizer and built-in sound effects, and the program also helps you organize your music collection due to its music library and smart playlist feature.

Moreover, AIMP supports multiple playlists, which means you can work with a playlist while another is playing.

A good media player needs to provide support for the most common tags and enable you to edit them. AIMP works with ID3v1, ID3v2, APE, Vorbis, WMA, and M4A and can apply changes to groups of files. The auto filling tag option allows you to create tags based on the name of the file.

AIMP is definitely worth trying – it has an attractive interface, it packs a very wide range of features, and it can do almost anything you’d expect from a music player. Even if you have tried many media players so far, AIMP will manage to make a good impression on you.
X
Report it!
Share
Share 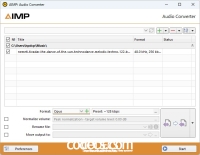 Freemake Music Box It allows you to search for online music, listen to audio files, and create playlists.

SubEdit Player SubEdit Player focuses on subtitle opening and editing, and it is versatile enough to play almost any audio and video format and any subtitle.

mpv player mpv is a mix of 2 projects, mplayer2 and MPlayer, with features from both players and many new ones introduced by developers.