XCDextractor allows you to open DAT files burned in Mode 2 Form 2 on an XCD.
Because of the format’s nature, files from an XCD cannot be copied directly; with the help of this application, you can copy any file burnt on an XCD to your computer.

By using XCDs, you have extra disc capacity (800MB instead of 700MB, like regular CDs).

Error correction codes are eliminated, and you don’t have the possibility to read back the movie files to the hard disk or other storage media.

Unlike standards CDs, XCDs supports arbitrary multimedia content like AVI, MKV, VP3, MPEG4, DivX, XviD and so on. VCD and SVCD support only MPEG1 and MPEG2.

All disc space is used for the actual media, instead of including error correction facilities.

On the other hand, this type of disc is recommended for media types that can handle errors to some extent, because of the reduced error correction capabilities.

Source files burned on XCDs can be read with the XCD extractor and even corrected, as the repair algorithm is not complicated. The aim is reading the entire file despite the presence of errors. If you manage to copy the file to your hard disk, you can try to repair the most damaged sections.

Another feature of XCDextractor is creating info files, which should be burned in the same directory as the DAT file, as it contains the exact file size which was lost when creating DAT and CRC32. If you lack the info, activate the “Try to guess file size” option checkbox and tail zeros will be removed from the end of the file.

XCDextractor has not been developed anymore for several years and is considered obsolete. Chances of anyone using XCDs are slim, but if you still need to handle some DAT files from an 800MB disc, this application is highly recommended.
X
Report it!
Share
Share 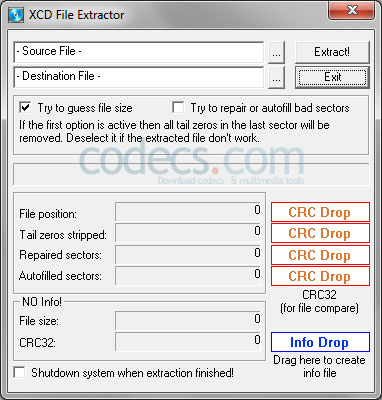 DVD Flick DVD Flick provides you with an easy way of creating DVDs by using as source files the most popular video formats.

Download 33KB
Freeware 10.838 downloads
Be the first to review it!

Write a review or just post a comment about XCDextractor .
Let other people know about your opinion or experience with this software.
Write a review