Wavelet Kompressor reduces the size of your images by using the wavelet compression method.
This software’s algorithm is based on multiresolutional analysis.

Wavelet compression is one of the best methods as it does not divide the image into blocks, but instead it analyzes the entire image, delivering superior compression ratio and better quality.

Wavelet Kompressor is currently discontinued, but this piece of software can still be helpful for any average user looking to enjoy the advantages of wavelet compression.

Other reasons to choose Wavelet Kompressor are its speed (the application uses an optional approximate mode for error estimation and with MMX wavelet transforms), using the same algorithm for both lossless and lossy coding, supporting multi-channels images and conversion between RGB and YCbCr, using simple run-length encoding, and encoding either for quality or for final size.

The last version of Wavelet Kompressor, 2.7, was improved with a better bitstream format, had its MMX optimization for wavelet optimizations removed to make code faster, its YUV transform was slightly changed, and decompression was set to work for all invalid data without overwriting.

Wavelet Kompressor is a good choice if you work a lot with images and you need to reduce their size to send them via email or post them on a website. The application is intuitive and easy to use and it will do the job in no time.
X
Report it!
Share
Share 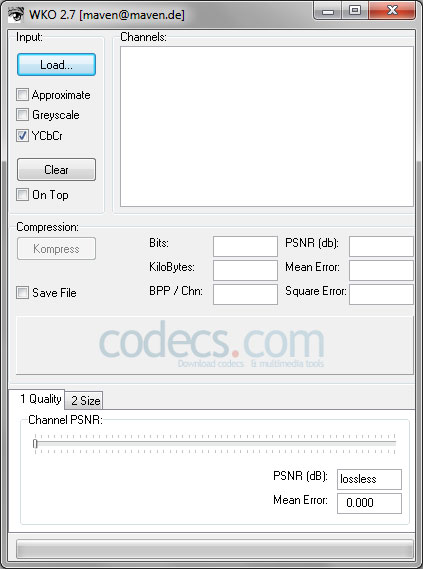 DVDx DVDx is an efficient tool for converting DVDs to common video formats that is perfect for less experienced users. Create VCD, SVCD and DivX files from your DVDs...

EncodeHD By installing EncodeHD to your computer, you will be able to re-encode your media contents in order to use them on the most popular devices.