KMPlayer (or simply KMP) is a versatile media player supporting a wide range of audio and video formats.
First released in October 2002, it has undergone many improvements; the formats it can play include AVI, DVD, VCD, MKV, Ogg, OGM, MPEG-1/2/4, WMV, 3GP, RealMedia, Quick Time and FLV.

It also supports 3D format videos and in March 2014, the KMPlayer Mobile App was launched for Android and iOS phones. Cloud KMP and KMPlayer for Mac are currently under development.

KMPlayer has several advantages compared to other players, which make it one of the most reliable software tools for playing video and audio files.

The player has its own internal codecs; it runs on low CPU computers; it is equipped with both internal and external filters; it prioritizes and selects codecs across the operating system due to the DirectShow merit system.

Users benefit from various options, such as setting audio and video effects, selecting as favorites certain parts of a video, changing the skin, slowing down or increasing playback speed and a diversity of configuration options.

The user-friendly design encourages you to avail yourself of all its features.

There is a series of least known features of the KMPlayer which make it an excellent option for the average user looking for a optimal experience.

This player also helps users better organize their media files with a Playlist Editor and it has included a Service APP feature, enabling you to use Billboard, K-POP Hot100, 3D Movie Plus, EveryonTV, VIKI and so on from within the player.

Customizing subtitles has never been easier, since KMPlayer has a control box allowing you to sync and out-of-sync subtitle files as you watch the video.

Other inconveniences are also easily solved, such as viewing split videos – they are merged automatically by KMPlayer.

IMPORTANT!
- KMPlayer installer is bundled with "offers". However, you may continue the installation process without installing it.
X
Report it!
Share
Share 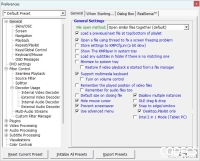 jetVideo JetVideo is a compact and reliable video player that allows you to play a variety of formats, while enjoying the most important features one could expect from a basic media player.

Kodi Media Player Kodi is a powerful media workstation that helps you uncover the full potential of your Home Theater Personal Computer.

Boom Boom is an audio player for users who like to keep things simple.

For new users: KMPlayer was made originally with the code of MPC and FFDSHOW, but when the developer sold the ...

not as fast as MPC when open a video.