Helix YUV Codecs is a collection of Video for Windows compatible tools which allow you to decompress and play I420 and YV12 AVI files.
Other actions performed by this codec are handling the output of AviSynth scripts and compressing video files to these formats.

Both tools decode I420 and YV12. They are almost identical, as they accept common input formats and provide lossless compression. The difference is that i420vfw.dll encodes to I420, while yv12vfw.dll encodes to YV12. With the Helix YUV Codecs you can obtain fast color conversions to the most popular RGB formats, YUV2 and I420 and YV12 when requested.

VfW codecs are necessary for playing and editing in VirtualDub and other similar applications.

Unlike XviD and MS H.263, the Helix YUV Codecs can convert both to and from I420 and YV12. The codec responsible for handling each format is selected automatically.

These codecs are very helpful for those using older machines and older versions of codecs and media players.
X
Report it!
Share
Share 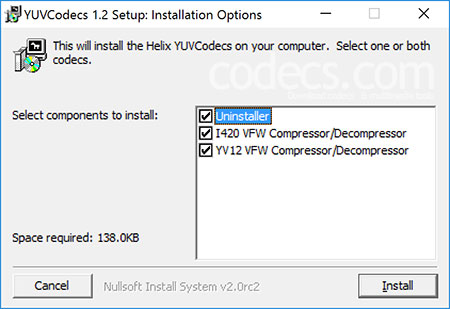 VP3 VP3 is one of the most efficient open source video codecs and a version of the TrueMotion video codec, which was developed by On2 Technologies.

DivX 10 DivX 10 is an advanced codec which enables you to convert and play almost any video file; it also allows high quality DivX HEVC video creation and video streaming.

Download 146KB
Freeware 74.935 downloads
Be the first to review it!

Write a review or just post a comment about Helix YUV Codecs .
Let other people know about your opinion or experience with this software.
Write a review