EASY Burning has been designed for anyone needing to burn CDs, DVDs and to create ISO files. It should allow you to backup any kind of file.
The most important features of EASY Burning are:

working with any CD writer, being integrated to the shell or being used as a normal application, allowing you to create Data CDs from folders, writing CDs and DVDs in the UDF format and burning Video DVDs.

It features an independent internal ASPI/SPTI detection system and it includes VisualISO for multi file and folder. The latest versions were improved with a verify option after burning.

Another advantage of this utility is the small size. It runs on all Windows versions and it is supported by computers with lower capabilities, too. EASY Burning runs trouble-free on older Windows versions such as 98, ME or XP.

The last version of EASY Burning was 2.3c and it was launched in 2008. The improvements added in this final release are supporting directly EASY Burning 2.03 CDRKIT and updating Cdrtools 2.01.01a26.

A major drawback in EASY Burning is its interface. It is unattractive and poorly organized and it will take you a while to figure out how to burn CDs and DVDs and how to access all the options you need to use. Moreover, some reviewers have reported errors when trying to burn with this application.

EASY Burning is probably not an ideal choice for backing up your MP3 collection or creating Data CDs, but when you have no alternative, it should probably be enough and meet some minimal requirements.
X
Report it!
Share
Share 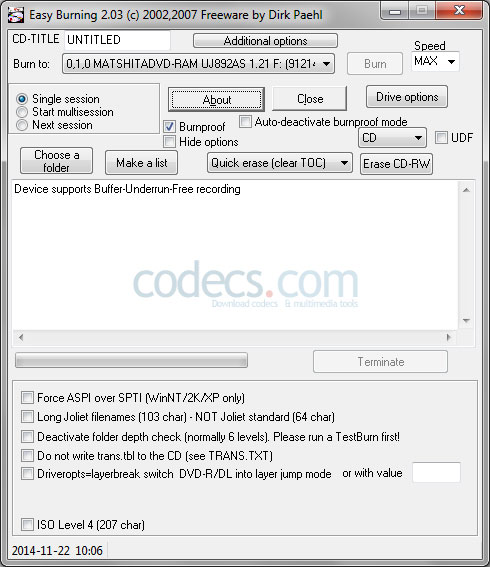 Burn4Free There are many CD/DVD/Blu-ray burning applications available, but Burn4Free stands from the crowd due to its simplicity, easiness of use and powerful features.

InfraRecorder InfraRecorder is a free tool for CD and DVD burning and which is also able to work with disc images.

HT Fireman Burner If you are looking for a basic and easy to use burning utility, HT Fireman CD/DVD Burner may be a good solution.

This program is free. EASY Burning is one of the easiest and fastest CD and DVD burning tool to copy/...