DivFix can detect errors in the audio or the video stream and, furthermore, it is able to fix most of them.
Frustrated because of partially downloaded movies which cannot be played?

Why should the entire file be spoiled because of some missing frames?

DivFix can solve this problem by rebuilding or stripping the index part of the movie, which is found at the end of the file.

DivFix is a portable application and you don’t need to install it to your computer and modify the Windows registry at all. You can even run it from an external memory device.

One of the repairing methods used by DivFix is rebuilding the index, which can work in the case of partially downloaded files with blank spaces.

Another solution is stripping the index, which is a good idea when you have an intact file but which doesn’t let you move around it.

DivFix is already outdated and its last version was released in 2006.

Some of the improvements added to the last versions are displaying the time of the errors, an auto-clear option to clear the listbox after finishing, a fixed I/O error 130 when stripping the index, fixed bugs in the “Cut out bad parts” option, turning on the “Keep original file” option by default for safety purposes and displaying the name and the number of errors after completing a file. Unfortunately there is no Help file with this utility.

Results are not 100% guaranteed with DivFix, but it’s not a bad idea trying this portable application in case you are dealing with a partially downloaded video file. There are many errors that DivFix can solve if you offer it the opportunity.
X
Report it!
Share
Share 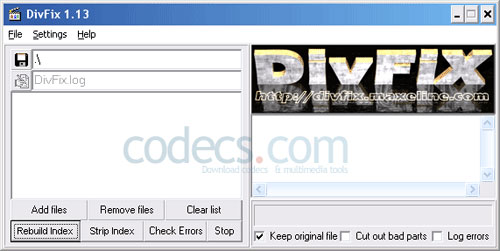 MP3 Checker You don’t have any idea why your MP3 files are corrupt? MP3 Checker will tell you everything you need to know about those MP3 files causing errors.

DllRegSvr DllRegSvr is a powerful application which enables you to register and unregister DLL and OCX codec files using the RegSvr32 tool, which is included with Windows.

BigFix BigFix is a very helpful kit which helps you solve problems related to audio or video filters and codecs.