Daum PotPlayer (or KMPlayer Reloaded) is a complete media player rendering almost any type of format without needing to install codec packs on your computer.
It has been created by the former KMPlayer developer.

The internal filters won’t affect the performance of your operating system because they are not enlisted in the system’s registry.

The ability to play and stream an impressive list of video and audio formats is the most important feature of Daum PotPlayer, but this media player deserves your attention for other advantages it offers as well.

It can play incomplete and damaged AVI files (it skips the damaged frames), it allows you to create keyboard shortcuts, it supports a variety of subtitles, it comes with various skins (including the possibility to make the windows transparent), it can remember where the user left off in a video and resume.

Furthermore, PotPlayer can apply video filters for customized playback and it allows users to change the contrast, brightness or hue of the video.

Daum PotPlayer can be thus considered an audio and video experience enhancer, enabling you to get the most out of your music and movies.

You don’t have to set your custom configurations each time; save your presets and apply them again every time you want to.

In a few words, Daum PotPlayer is one of the best media players for Windows, due to its flawless performance, user-friendly interface and the ability to play almost anything.

Its large number of features will please experienced users, but they will not cause inconveniences to beginners, either.

The interface is intuitive and you’ll be ready to enjoy an amazing media experience as soon as you launch the application. 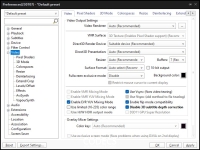 BSPlayer BS.Player is one of the most popular players, which allows you to play videos, music, DVDs, TV streams, teletext, radio streams, podcasts and even more.

Nice full-blown media player. The TON of config settings can be overwhelming, but everything needed works well. Wish check for ...

For new users: PotPlayer is an excellent multimedia player for Windows, DirectShow based. The player was originally made with the ...