CodecInstaller is useful for all users who don’t manage to play certain media files and don’t know what codec they should install.
This application will solve your media playing problems; this tool founds the audio and video codecs installed on your system, it detects the missing codecs based on the analysis of media files and it eventually suggests you the new tools you need to deploy to your computer.

In order to import a media file to CodecInstaller, you can use the drag and drop method or the traditional file browser.

Besides indicating the codecs you need to install in order to play a certain media file, CodecInstaller also lists the codecs that are already installed to your system.

If a certain codec you need is missing from your system, CodecInstaller offers to deploy it to your computer. Some of the tools provided by the application are DivX, XviD, Intel Indeo, FFDShow, AC3, Matroska, MPEG Layer-3, MusePack, AAC and OGG Vorbis. Another possible situation is having a codec installed on your computer, but needing to update to the latest version. CodecInstaller can do this, too.

Power users can enjoy an additional feature besides the ones mentioned before: they can choose to remove a filter or lower its merit value. Another interesting option is creating CDs and offering the user of the CD the possibility of installing any missing codecs, too. This means that anyone will be able to play the files on the disc you create.

CodecInstaller is strongly recommended to anyone dealing with playback problems and interested in easily finding the codec they need.


IMPORTANT!
- CodecInstaller installer is bundled with "Crawler Toolbar". However, you may continue the installation process without installing it.
X
Report it!
Share
Share 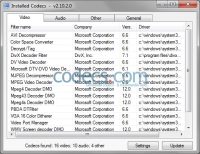 PlayTime Would you like to find the total play time of your videos and audio tracks, all of them or just a list?

DXMan DXMan is a management tool for adding or removing codecs and plugins.

VCSwap VCSwap allows you to switch between various codecs while editing your videos. This tool is dedicated to advanced users, who need to be familiar with video editing.

DXVA Checker DXVA Checker will show you a list of all the DirectShow and Media Foundation codecs on your computer and display for each item various information.

Write a review or just post a comment about CodecInstaller .
Let other people know about your opinion or experience with this software.
Write a review