Winamp is a widespread and extremely popular music player for Windows which can also render video files.
Update: Winamp is alive and kickin'!
Get the Winamp Community Update Project (WACUP) 1.0.2 and the latest Winamp beta, 5.8 from download page and see full changelog here.

Until new Winamp 6.x version is released (it should be, this year!), DrO has uploaded a patched version of the last version provided by AOL, Winamp 5.666 and called it suggestively, Winamp Redux. See full list of changes below.

Winamp has been around for many years due to its easy-to-use interface, flexibility and high fidelity play-back.

For those users which only listen to music in Winamp, they should know that this reliable piece of software offers a wider range of features than expected.

Install the latest version of Winamp and explore visualization and audio effect plug-ins; organize your contents in the advanced media library provided by Winamp; enjoy radio and TV support and even perform CD ripping and burning.


IMPORTANT!
- WACUP (WinAmp Community Update Project) is designed to work only with the patched Winamp 5.666 release to provide bug fixes, updates of existing features and most importantly new features with the goal to eventually become it's own highly Winamp compatible media player.
- When installing Winamp, you have the possibility of accepting or refusing the “Winamp Toolbar” which is embedded into your Internet browser.
Being discontinued since December 2013, one of its latest available versions is Winamp 5.7.3444 beta, which runs on Windows 8 and which is still downloaded by thousands of users.

Compared to previous beta builds, this version includes several improvements. With the 5.7.3444 release, you can use an up/down spinner control on the playlist configuration page which helps you adjust the font size.

Furthermore, you have the possibility to uninstall when beta revisions expire.

The stability of the Winamp 5.7.3444 beta has been significantly improved and some crashes have been eliminated.

The most important changes in this version of Winamp include the following: having the possibility to disable the mouse wheel from changing the volume, extra notification area tooltips up to 128 characters instead of 64, using a Reset button to clear history in the Open/Add URL dialog, removing invalid characters from playlist name on export and many others.

Despite of viewing more and more contents on the Web and storing our information in the cloud rather than on our computers, Winamp still has its place on any computer and it has not lost its usefulness.

Changes to Winamp Redux 5.666 compared to the original installers:

- Includes both of the in_mp3 and JTFE update patches
Hardly anyone is downloading them and wonder why 5.666 is crashing for them!
- Removed all Gracenote provided dlls since Winamp no longer has access to the Gracenote services
Loss of the Gracenote functionality breaks CDDB lookups, Auto-Tagger and Playlist Generator
- Removed Auto-tagger (ml_autotag.dll) plug-in
- Removed Playlist Generator (ml_plg.dll) plug-in
For some it may still work depending on the existing local playlist generator database but for most it is not even able to initialise to start using it
- Removed Winamp Detector browser plug-ins
These weren't installed by default in 5.666 anyway and are useless now post-sale
- Includes 'fixed' notifier.png for the Bento skins
- Includes 'fixed' notif-bg-alpha.png for the Winamp Modern skin
- The installers are not signed but any originally signed exe / dll files are within the installers
I do not have the means to sign them and doing so would not be the correct thing to do anyway 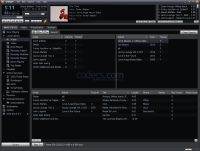 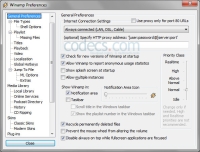 ALShow ALShow allows you to play DVDs and movies without needing additional software.

KMPlayer KMPlayer is a versatile media player supporting a wide range of audio and video formats.

RealPlayer RealPlayer Cloud allows you to play, organize and share your audio and video contents with friends.

confirming that there is a general problem with winamp not closing properly; application need to be killed in task manager; ...

winamp is awesome since ancient times, too bad it is very bloated and full of crap this days, you need ...