TrueMotion VP7 is considered one of the best video compressors, which can offer high quality at datarates ranging from dial-up to high-definition.
Just like its predecessor, VP3, it has not been updated for a long time (the last version of the VP7 codec was released in 2006) and it offered excellent support for DirectShow and Video for Windows.

The main advantages of VP7 are the fast encoding speed, being less complex than standard-based codecs used by competitors and decoding in fewer cycles.

As a result, your media playing application will produce an amazing video quality using a low amount of system resources and zero costs.

VP7 can be integrated with compatible applications and it can also be used by advanced users in order to adapt the default settings to their exact requirements. The parameters which can be adjusted are the encoding speed and mode, the sharpness, the noise reduction value and the encoding mode. Quantizer adjustments can be enabled or disabled and you can specify the minimum and the maximum values.

The last version of VP7 was 7.0.1.0 and it was launched in 2006. It featured changes to the motion search algorithm, improvements of the 2 pass rate control and improved speed on best quality mode.

VP7 has been discontinued and in order to enjoy optimal video compression you can opt for some of its successors. Nevertheless, those using an older computer can still find this codec suitable for their needs.
X
Report it!
Share
Share 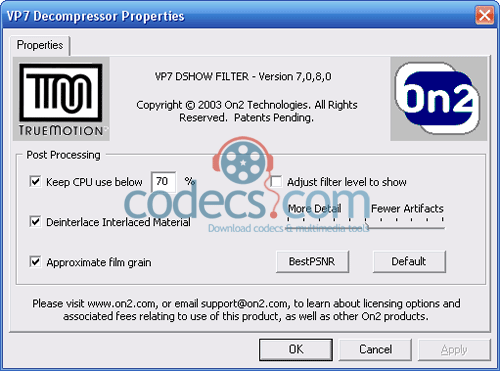 VP9 Video Extension Play VP9 videos in any video app on your Windows 10 device. VP9 is a popular video codec for streaming over the internet.

LAV Filters LAV Filters (formerly LAVFSplitter) is a collection of DirectShow media splitters and audio/video decoders that allow you to play a wide range of media formats.