iPodifier is recommended to all users who capture TV content using SageTV, TiVo, or Windows Media Center, and want to transfer the videos to their iPods.
iPodifier is superior to similar applications, as it automates the process of getting videos to your iPod.

It does not just re-encode the video to make it compatible with iPod, but it automatically completes the following process: checking for new videos, converting the video into an iPod compatible format, adding the converted video to iTunes, organizing videos into playlists and synchronizing the iPod.

The input accepted by iPodifier can come from a variety of sources, including Windows Media Center, SageTV, Bittorrent, etc. and the application monitors the video source folder and adds entries to the transcoding queue whenever it detects new videos.

With iPodifier you can set a quota for TV shows, which means that the application knows how many episodes you want to store on your Apple device and lets you know when you need to delete some of them. Furthermore, due to the video preview window, you can get a glimpse of your TV shows before transferring them to your iPod.

iPodifier has not been developed anymore since 2008, and its last version, 1.5, was added several fixes: capturing and transferring metadata to iTunes, too; native support for dvr-ms files using ffmpeg instead of DVRMSToolbox; improving the video source wizards in order to select iPod and iPhone resolutions more easily; capturing metadata for SageTV from XML file and not from filename and starting the application minimized on every reboot by using a command line switch.

Converting your favorite TV shows and transferring them to your iPod has never been easier; iPodifier provides you with an automated and perfectly optimized process so you can watch last night’s show that you missed the next morning on your way to work.
X
Report it!
Share
Share 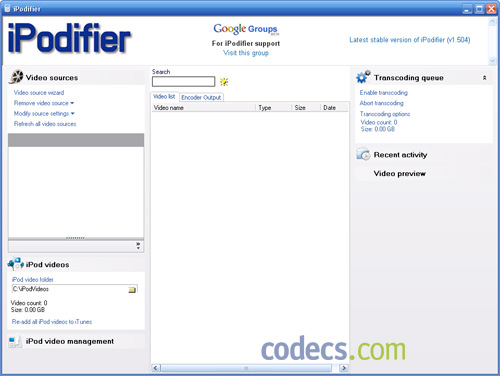 GSPlayer GSPlayer is a free audio player that can be used with PocketPC and smartphones.

Download 8.46MB
Freeware 4.029 downloads
Be the first to review it!

Write a review or just post a comment about iPodifier .
Let other people know about your opinion or experience with this software.
Write a review