FLAC (stands for Free Lossless Audio Codec) is a compression tool which can handle FLAC, OGG and WAV formats.
It performs FLAC conversion, which is designed especially for audio files. You can play FLAC files directly on various supporting devices, without decompressing them.

FLAC is a lossless audio coding format which reduces audio files to 50-60% of their original size. It is superior to MP3 and it doesn’t affect the quality of music.

FLAC contains the following: the stream format; encoder and decoders in library form, plugins for various music players and two command line programs: “flac”, which encodes and decodes FLAC files, and “metaflac”, which is a metadata editor for FLAC files.

Less experienced users are advised to work in FLAC Frontend, also supplied in this package.
FLAC has a series of advantages which will definitely convince you to use it if you are interested in compressing your music smartly.

It doesn’t affect the integrity of data; it performs fast real-time decoding on even less advanced hardware; it supports any kind of hardware; you can use it in editing applications due to its fast sample-accurate seeking tool; you can introduce new metadata blocks without breaking older streams of decoders and errors don’t damage the entire stream. Instead, they only affect the containing frame.

FLAC is extremely suitable for archiving. You don’t lose any data, in case you want to convert the music to another format. This application has a verifying option which allows you to decode the encoded stream during the encoding process and to compare the result with the original input.

FLAC is a complex tool, in spite of its small size. It introduces to you one of the best audio coding formats and it helps you save disc space without affecting the quality of your music.
It is rather suitable for experienced users, but anyone can give it a try if they just want to convert audio files to FLAC and nothing more.

Once again, this release only has a few changes. A problem with FLAC playback in GStreamer (and possibly other libFLAC users) was the reason for the short time since the last release
+ General:
- Remove xmms plugin (Martijn van Beurden, TokyoBlackHole)
- Remove all pure assembler, removing build dependency on nasm
- Made console output more uniform across different platforms and CPUs
- Improve ability to tune compile for a certain system (for example with -march=native) when combining with –disable-asm-optimizations: plain C functions can now be better optimized 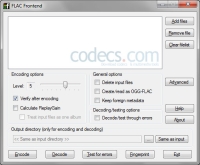 DC-DSP Filter The DC-DSP Filter is a Microsoft DirectShow audio filter which is built around the DC-DSP Components and which can process 8/16/24/32 bit integer PCM and 32 bit IEEE float audio data.

No instruction, how to installing?