Backing up your DVDs is extremely simple with DVD Rebuilder, a powerful application which uses the CinemaCraft Encoder Basic/SP or QuEnc (ffmpeg) encoder or the ReJig transcoder engine.
It allows you to obtain full DVD backups, which include the movies, the menus and the extras and it works for DVDs from DVD9s to DVDR.

DVD Rebuilder is a portable program, and you can run it whenever you need without installing it to your computer.

The application can be saved on your local disk or on any portable memory device.

The main advantage of portable tools is not modifying the Windows registry.

DVD Rebuilder has an intuitive, plain interface, which allows you to easily specify the DVD source path, the output folder and to pick those streams you want to backup.

Along with the backup operation, you can also ask DVD Rebuilder to compress your DVD movies and you can select between CCE, HC Encoder, QuEnc, ReJig and ProCoder. You can make some changes such as modifying the background color or getting space from extras.

The latest versions of DVD Rebuilder have been upgraded with various new features and fixes: improved authoring engine, added codes to prevent some errors, fixed some bugs, improving the interface, updated the installer to include QuEnc v0.71, HC Encoder v0.18, and ECLPRO v1.00 (RC1) and improved the layer_break recognition routines to organize better seamless branching titles.

DVD Rebuilder is recommended to anyone interested in backing up their DVDs due to its diverse options and impeccable functioning. The application works fast and it provides one of the simplest ways of copying DVD movies. The last version of DVD Rebuilder has been improved substantially compared to previous releases.
X
Report it!
Share
Share 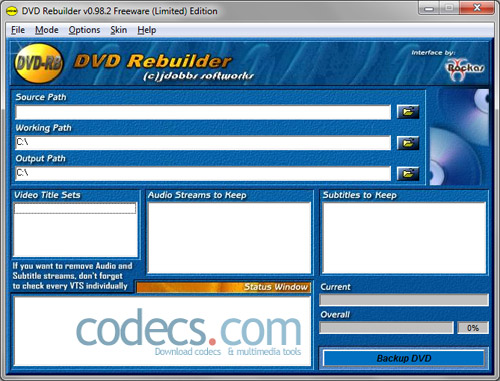 DVD43 DVD43 is a small utility which eliminates copy protection from DVDs. You can enjoy your favorite movies regardless of the region the disc is set to work in.

Write a review or just post a comment about DVD Rebuilder .
Let other people know about your opinion or experience with this software.
Write a review