3ivx MPEG-4 is a toolkit offering support for MPEG-4 videos, MPEG-4 audios and for the MP4 file format.
Converting media to these formats makes it possible to store and transmit large videos while preserving quality.

3vix MPEG-4 is a superior format, offering a variety of advantages.

It encodes twice as fast as the Apple MPEG-4 standard, and it maintains the same high quality at half the size.

Consequently, a single CD can comprise more than 2 hours of near DVD quality video or you can stream the output using a DSL or a cable modem.

This decoder plays most common formats, such as MP4, M4A, AVI, MOV etc. The audio decoder is able to play MPEG-4 High Efficiency and Low Complexity AAC audio encoded by Nero AAC, iTunes and others.

3ivx MPEG-4 is compatible with most media players, such as Windows Media Player or QuickTime Player. Videos encoded with the 3ivx MPEG encoder can be played without you needing to install additional software.

When 3ivx is missing, the Audio Codec Tag 5376 may be requested.

The high quality results are possible due to the excellent post-processing filters used by 3ivx MPEG-4.

Other advantages of this software tool are the extremely small size (less than 1MB) and the high processing speed.

All things considered, 3ivx MPEG-4 is an excellent multimedia tool and you definitely need to consider it if you need to work with a format which saves storage space and doesn’t affect the quality of the videos. 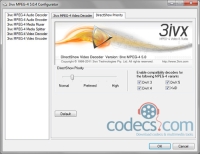 Shareware?? What a ripoff. Phooey on this.

a shareware codec? ridiculous, This is the US capitalist system gone to psychotic extents. The work around? Uninstall after it ...